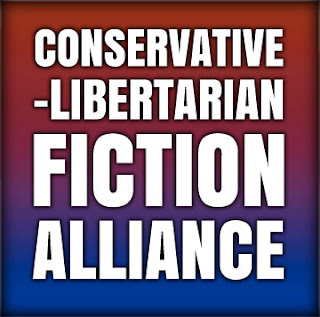 (April 5, 2016) - The Conservative Libertarian Fiction Alliance (CLFA), a network of authors, readers, editors, publishers, reviewers, artists, and cultural leaders who read, write, and promote pro-liberty fiction, has released the list of the ten Finalists for the 2015 CLFA Book of the Year award.They are (in alphabetical order by author's last name):

The Notice by Daniella Bova
The Cinder Spires: The Aeronaut's Windlass by Jim Butcher
Son of the Black Sword by Larry Correia
Honor at Stake by Declan Finn
By the Hands of Men Book Two: Into the Flames by Roy M. Griffis
The Devil's Dictum by Frederick-Heimbach
Amy Lynn, Golden Angel by Jack July
Amy Lynn, The Lady Of Castle Dunn by Jack July
Her Brother's Keeper by Mike Kupari
The Violet Crow by Michael Sheldon

All titles are available for purchase on Amazon.

To qualify, books had to be novel length (minimum 50k words) fiction first published in the calendar year 2015. Self-published, small press and traditionally published works are all eligible, including e-book and audio formats. Authors need not be members of the CLFA or even consider themselves to be politically aligned with the CLFA in order to be nominated and win. Books were nominated by members of the CLFA closed Facebook group. The top ten nominees are the finalists.

Voting to determine the winner will commence on June 1st via a Survey Monkey poll, which will be open to the general public. A link to the survey will be posted on the CLFA public Facebook page and at conservativelibertarianfictionalliance.com, and shared via other social media at that time. Voting will conclude on June 30, and winners will be announced shortly thereafter.
Good luck to all the nominees!

To join the CLFA Facebook group, visit www.facebook.com/groups/CLFAgroup/ and request to be added.