Apologies for the long absence. As luck would have it, my family's long-ago-planned trip to Disney World (which might end up as a subject of a separate blog post), followed immediately by dropping off my oldest at college in Atlanta (cry, sniff) kept me away from my regular blogging schedule.

On the bright side, one advantage of travel, especially by plane, is an opportunity to catch up on reading. Thank you, Delta Airlines, for giving me those extra four hours at the airport. In fairness, weather in NYC was to blame, but you get the idea.

Be that as it may I am now in a position to review two of Ben Zwycky's novels at once. Short version for the impatient: you better learn how to spell that name because you're likely to be looking him up on Amazon in the future in search of new releases. 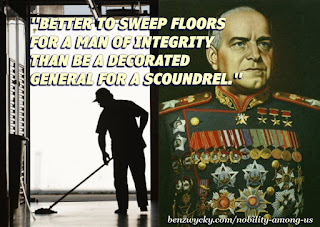 The novel is nominally an alternative-history dystopia, set in a word where modern and futuristic technology co-exist with a feudal social structure and oppressive political system. At its heart, though, it's an adult fairy tale with a strong Christian flavor (Christianity is not specifically named, but it is clear which religion plays a pivotal role in the story). My initial reaction was to compare it to C.S. Lewis, but I always dislike authors and reviewers touting "Book X" for being "the Next Book Y." I do, however, think that it will attract the same type of reader, so the mention is appropriate.

The main plot line centers around a nobleman, guided and assisted by his wife (who came from a humble background but has more to offer than meets the eye), trying to bring justice and economic reforms into the society where tradition has not been challenged in a meaningful way for hundreds of years. Naturally, this doesn't sit well with those in power, and the struggle that follows will go well beyond normal court intrigue and military clashes of typical fantasy offerings.

It is an unusual choice to place a happily married couple, with young children, at the center of such story, and the plot does indeed proceed along a different path than would be expected. The main characters' decisions and actions drive the plot and influence the world around them, but they remain essentially unchanged throughout their many trials. Interesting character arcs are instead reserved for the secondary protagonists, and this is where the quality of writing rises to another level, covering many of my favorite themes, from redemption to mature romantic love to the true definition of duty and honor. Twists and surprises abound, some strongly foreshadowed, some coming seemingly out of nowhere (at least until you think about it some more, and then it makes sense). There a few points towards the end where I was sure the author wrote himself into the corner and there was no way for everything to resolve in a coherent way, but then it did, which was probably the biggest surprise of them all. 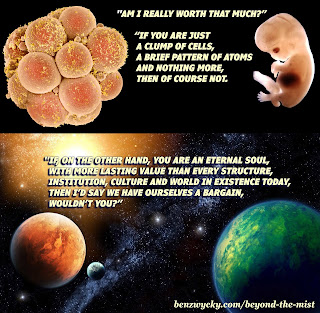 Remember how I said I don't like saying "this book is just like <fill in the blank>"? Well, I still don't. Except this one positively screams "John C. Wright" and not just because he wrote the Foreword. The cover, the wording of the blurb, and the promise of addressing the Big Issues are sure to attract most Wright fans. That, of course, comes with a downside of too-high expectations and greater potential for disappointment, but all in all it's a good problem for an author to have.

The central premise/question is as simple as it gets, and the beauty of sci-fi as a genre is that it allows us to address the basics in settings that strip out the distractions and complexities of the real world. At first glance, our nameless protagonists finds himself in a state of perfection. Floating in the mysterious mist requires no effort; there is no pain, no hunger or thirst; the sensation is, in fact, quite pleasant. When his mind rebels and starts asking questions, voices tell him to be content, to enjoy this freedom from want and pain, to be grateful. A single voice, however, offers something different: a way out, into the unknown.

It's not a spoiler to say which path the protagonist would choose; the title of the novel, after all, provides the answer. What would he find "beyond"? Will his worst fears be realized? Will the knowledge he seeks end up destroying him? I won't give away the answers except to say that unlike in most of today's gimmicky setups that leave readers scratching their heads in disappointment, clear and substantial answers are, in fact, found.

The last section of the novel does switch gears and becomes more of a traditional mystery (which, as it happened, was too easy for this Agatha Christie fan to solve). It probably could have been saved for the upcoming sequel, but I also felt that the protagonist, and the reader, having found resolution to the Big Question, should not be left in complete ignorance about all the rest. Thus, more searching, more answers, and while there is a definite setup fro a sequel, the ending is quite satisfying.

In case you haven't figured it out yet, both novels are highly recommended. Purchase links in the titles above. Happy reading!
Posted by Masha K. at 9:52 AM