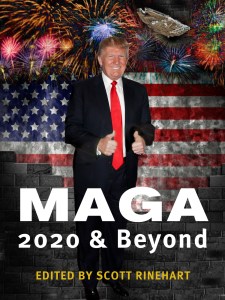 When I first heard of a pro-Trump anthology intended to show the bright side of Trump’s election, I was curious about the concept, but had no thought of contributing. For one, stories of a great future are hard to write. There is less conflict in a utopia. Typically, positive future stories tend to be science fiction, with Star Trek being probably the prime example. The appeal of Star Trek at its best comes from the sense of wonder and adventure, and the conflict, when it happens, is usually external in nature, be it hostile aliens or technical difficulties.The Federation is essentially a utopia, but the show doesn't linger on the details. If someone decided to tell a story of the greatness of life in The Federation, it would likely be a snooze fest.

Add to it the fact that I am a dystopian author, and you can see why I initially scrolled on by when the submission call came across my Facebook feed.

But then, as I suppose is the case with many speculative fiction writers, I started thinking of the “what if.”

What if a group of hardcore Trump opponents decided to separate themselves from the society, not through a secession that created two side-by-side states, but by entirely cutting themselves off? (Think the Galt’s Gulch, but populated by… let’s just say they’re not the Randian hero types). No flow of information. No knowledge whether Trump’s policies succeeded. As the first generation dies off, even stories of the past are fading. The outside might be great, or it might be an Apocalyptic wasteland where people starve in the streets. The only way to know is to leave, but there is no coming back.

What would you do?

Sure, your life isn’t great. Work is hard. Food is limited. There is no privacy. Government officials watch your every move.

So leaving is a no-brainer, then?

You have a job. A place to live. Food. Friendship. Respect. It’s not much, but it’s a life.

Do you throw it all away and venture into the unknown?

And just like that, it’s not so simple, is it?

As an immigrant whose family waited for permission to leave the Soviet Union for ten years, let me tell you: it’s really not. When that final moment comes, when you realize all you’re giving up, when you suddenly remember the little things about your life that you do like… No matter how motivated you are, the doubt will be there.

Conversely, what if you were content to stay? How would you react to someone who wanted to leave? Would you feel worried, angry, betrayed, or some combination of both? Would you try to stop them?

And so, I had enough questions in my mind to write a story of almost 6,000 words called Exile. I hope you enjoy the result.