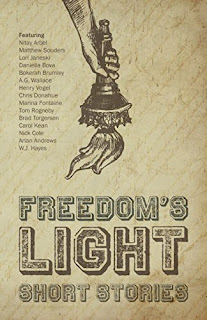 The following is not quite a book review because this anthology from CLFA authors and friends includes my story. However, since there are many other stories alongside mine, and since this is a charity anthology to benefit the Foundation for Individual Rights in Education (FIRE), I decided that it would be appropriate to share my thoughts on my own blog. The stories are reviewed in the order they appear.

1. The Tenth Righteous Man by Nitay Arbel. If you think this story has basis in the real world, you would be right, but you have to read and find out the specific source of reference for yourself. First-person narration is used for great effect here, and the ending, plus the final reveal, surprised me. If I have any criticisms, the style seems a bit dry considering how emotionally charged the story actually is. Very different, and a great start for a freedom-themed collection.

2. Martian Sunrise by Matthew Souders. In spite of the otherworldly setting, this is probably the most literary entry. It's also the least political, and is more about facing one's demons and the fact that sometimes the worst prison of all is the one we create for ourselves. Lovely and touching without crossing into the maudlin territory, which it easily could have done.

3. Backwater by Lori Janeski. A solid demonstration of the oft-repeated truth: "You might not be interested in politics, but politics is interested in you." It's set on a colony planet where most of the residents think themselves safe from government overreach, and find out the hard way it's not the case. The story is a setup for another work, so the ending is intentionally incomplete, which might bother some readers more than others.

4. The Birthday Party by Daniella Bova. Unlike the many dystopian entries in this collection, Ms. Bova's story takes us back to the past (some of the incidents are in fact connected to the author's family history). It makes us appreciate how far we've come as a country, both in terms of civil rights and just general tolerance towards those different and less fortunate. As we continuously strive to promote freedom and preserve out rights, it helps once in a while to step back and appreciate the progress we've made.

5. Dollars on the Nightstand by Bokerah Brumley. Although set firmly in the real world, this story is similar in its message to Ms. Janeski's Backwater. The government, left unchecked, will eventually overreach and make criminals out of citizens who just want to be left alone. The "crime" revealed at the end is, in fact, already a crime in some parts of the country, so even though the premise seems ridiculous, we're only a step away from it being true.

6. The City by A.G. Wallace. Here we get firmly into the dystopian territory, although the society presented seems entirely benign. This is very reminiscent of The Giver and the Matched trilogy, where all seems well until one finds out the cost of keeping up the apparent utopia. I appreciate the fact that the author acknowledges that a society of this type will need an escape valve to deal with those who don't wish to comply, without resorting to mass murder. The ending is abrupt, but in a way that makes one want to know more rather than leaving the reader frustrated.

7. Nomod by Henry Vogel. Another not-quite-dystopia showing the logical conclusion to the dreams of a perfect society achieved through bio-engineering. Although predictable, it's a fun read and not at all dark. Honestly, I would have preferred  it in the form of a full novel or at least a novella, to allow for events at the end to actually unfold before our eyes rather than be described.

8. Sara by Chris Donahue. I think I now understand why some authors write in shared worlds. The setup described is pretty much next door to the world of my novella The Product, although there are differences. The reveal happens early on, which allows the author to really get into the details of what drives those who choose to defy the society's norms, and how they manage to stay safe from the all-powerful government. I won't discuss the ending, except that I absolutely loved it.

9. Room to Breathe by...me! This story is set in the world of my novel Chasing Freedom. For those who enjoyed the novel, but want to see a little more of the world, this is a backstory for one of the side protagonists. It is entirely self-contained and is meant as a tribute to free artistic expression in an oppressive environment.

10. Victory Garden by Tom Rogneby. A very low-key dystopia that shows the world ruled, essentially, by an HOA on steroids. Neighbor spies on neighbor and corruption abounds (which is why it all seems so low-key: pay off the right people and you'll be fine).  The ending surprised me by bringing in some new elements that hint at more possible stories in this world. Or at the very lease it points to potential start of serious resistance. It's a good balance of closure and leaving the reader wanting more.

11. The Unsent Letter by Brad Torgersen. A military fiction story that surprisingly has no military action. It focuses more on the military as an eternal brotherhood of people dedicated to a worthy cause. A worthy inclusion in a freedom-themed collection that reminds us of those who protect our freedoms on a daily basis, often at a terrible cost.

12. Credo Man by Carol Kean. A true genre bender that starts as a small town family drama, turns into a whodunit mystery, and adds a sci-fi plot twist seemingly out of nowhere. Does it work? I think so, but you have to accept the quirky turns and just go with it. The author's German heritage adds authenticity to the sometimes over-the-top tale.

And speaking of quirky...

13. The Fighting Beagles and the Attack at Dawn by Nick Cole. This has all the makings of satire, with all the ridiculous character names and fictional battlegrounds. In the end, though, it leaves you with a very earnest appreciation of both the absurdity of war and, more interestingly, of true old-fashioned manhood. At least that's what I got out of it; it's quite possible If the author meant something entirely different. In any case, it's a wild ride of a tale.

14. Shirt Story by Arlan Andrews. With all the talk of the New Civil War and the irreparable ideological split in this country, this story is perhaps the most timely of all as it shows a potential logical conclusion if we continue on this path. It's disturbing in a way different from most dystopias because the concept seems ridiculous, yet at the same time we're THIS close to already living it even without the technological aids envisioned by the author. I think it attempts to be satirical, but for me cuts to close to the truth to be funny. Be that as it may, the story is well done.

15. Polk's Prophetic Property by W.J. Hayes. Probably the strangest story of 'em all. A businessman works to convince Cthulhu (yep, you read it right) to leave his land alone and go wreak havoc elsewhere by quoting from the American founding documents. 'Nuff said.

Obviously, as a CLFA co-founder and one of the contributors, I am biased, but hopefully this extended review will give you more of an idea of what you find within this volume. It truly does have something for everyone, and I hope you find it an enjoyable read.

Link to the CLFA website
Posted by Masha K. at 5:15 PM